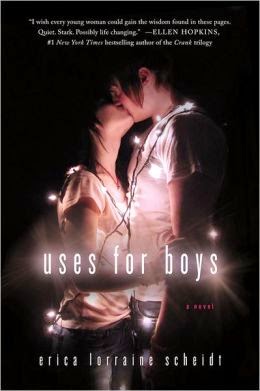 In "the tell-me-again times," when Anna was a little girl, she would crawl into her mother's bed and her Mom would tell her, "She had no mother, she had no father.  All she wanted was a little girl and that little girl is me." But by the time Anna turned eight, she found that wasn't really true.  There was a different story.  Her mother wanted a husband and a house and a life outside the house, and she had little time for Anna.  Instead, Anna was left alone for hours and hours (and eventually days and days) in a big empty house, without a mother and without love.  Her mother was always distracted by the latest man and by chasing after the next rainbow.

So, Anna discovered how to find her own happiness in the attention that boys gave her.  The physical sensations were nice, but most of all, it was the feeling of being needed and wanted that provided Anna a surrogate for love.  The few friends she had at school rejected her as a slut, but eventually she left school anyway and simply focused on boys.  They provided what she needed and were more useful than school.

An immensely powerful, touching, and ultimately disturbing story of longing and the way that sex is too often used as a substitute for affection and love.  It's not really a story for teens (or even most adults) - not because of the depictions of sex and drugs, but because of the narrative itself.  I've read a fair number of reviews that wring their hands at the cruelty of the mother in this story, but it is obvious to me that she's as much of a victim as Anna herself (and even more trapped in the conflation of sex with love).  And the ending, while quite sad, leaves an amazing seed of hope that Anna has the strength and the smarts to break the cycle.  Young readers (and most adults) won't understand how Anna got this way and will quickly condemn her as a lazy "slut" in the type of defense mechanism that people who have not been there use to protect themselves.  But this story is really quite universal and that makes it very powerful.

I love love love Scheidt's writing!  From the very first chapter, I was drawn in to this story.  The beautiful way she establishes the neediness that Anna feels, in its pure and most innocent sense, goes so far to make the rest of the story believable and full of pathos.  One could criticize the flatness and opaque nature of all the other characters.  But seen through Anna's damaged eyes, it's fully understandable that we will never understand the others fully (after all, Anna is incapable of doing so!).

A truly brave and moving story, about a painful and difficult topic.  Amazing!!
Posted by Paul at 12:01 PM