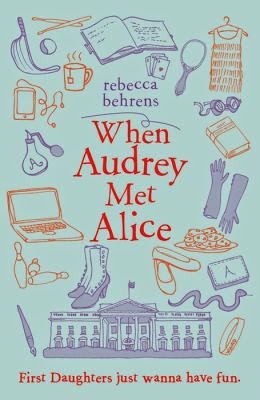 Being the daughter of the President of the United States is tough!  You're never allowed to go out without a security detail.  People at school are only friends with you because of who you are.  Your mother (POTUS) and father (the "First Gentleman") are far too busy to spend time with you.  You can't even sneak a boy into the house without setting off the Secret Service!  First Daughter Audrey has pretty much had it with life in the White House!

But when Audrey stumbles across the long-hidden secret diary of Alice Roosevelt (daughter of TR), she discovers that presidential children have always had it rough.  Inspired by Alice's spunk and daring, Audrey tries to claim a bit of glory of her own (or at least some independence).  The results are catastrophic, getting her into far more trouble.

Basically, it's harmless fun for younger readers.  Not quite as enticing as Meg Cabot's All-American Girl, but a little more rooted in reality and historical fact.  Behrens imagines a far more liberal presidency than I can picture within my lifetime, but the real story of Alice is fascinating reading and will excite younger intellectual curiosity.  As for her contemporary counterpart, one wishes that Audrey didn't make so many bad choices or that the book didn't go for such a spectacularly happy ending, but that's how middle grade readers tend to go.  Entertaining and educational fun!
Posted by Paul at 3:36 PM