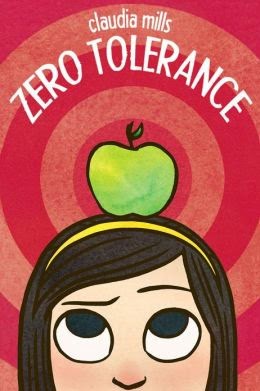 When seventh-grader Sierra accidentally brings her mother's lunch to school, she's in for a surprise when her mother's paring knife falls out of the bag.  She's also in big trouble!  Her school has a zero tolerance policy regarding weapons and drugs.  Her friends urge her to simply hide the knife, but Sierra's always been rule-abiding, so she turns it in immediately and tries to explain her mistake.  Her principal, however, makes a big deal about applying the rules fairly and feels obliged to carry out the mandatory punishment for such an offense:  expulsion.  Sierra, a perfect student and a class leader, has never been in trouble before, but over the next two weeks as she awaits her sentencing while in mandatory in-school suspension, her eyes are opened to the world of being on the other side of the law.

Mills remains one of my favorite writers of traditional middle readers.  The particular subject is topical and handled well, with little sensationalism.  Mills articulates the way that rigid and unimaginative authority undermines discipline in the long run, and avoids making out any one person as a good guy or a bad guy. This would make a nice book for a group discussion, but is equally enjoyable to read on one's own.
Posted by Paul at 6:37 PM