Can't Look Away, by Donna Cooner 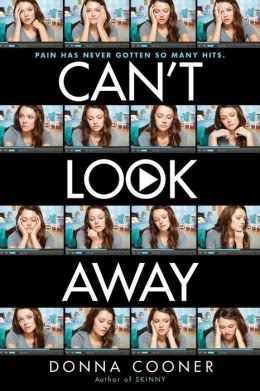 Torrey has always liked being in the public eye.  Her popular fashion VLOG has been a dream come true, garnering plenty of attention.  But after her younger sister is killed by a drunk driver, Torrey finds that public attention isn't always kind.  As the comments turn from sympathetic to nasty, she shies away from posting to her site.  Conveniently, her family decides to move from Colorado to Texas, giving her a chance to start over (at least outside of cyberspace).  But once in Texas, she finds that the desire to re-establish her credentials as an It-Girl conflicts with her desire to escape her past.

Her attempts to ingratiate herself into the company of the popular clique also come into conflict with her romantic aspirations as she finds herself falling for brooding Luis -- an outcast.  Luis, however, understands her grief over the loss of her sister in a way that no one else does.  And he helps her to understand the futility of seeking fame and popularity.

It's a pleasing story with most of the tropes of YA fiction.  The girl doesn't quite fit the plain Jane standard for a heroine (she far too pretty and vain), but she has the right amount of insecurity to make her instantly worthy of empathy.  But Torrey didn't really grab me.  She's too narcissistic and her complaints are repetitive and whiny.  Her coming around at the end is entirely too neat.  The boy is, of course, too perfect as well as being conveniently unattached.
Not everything is standard and predictable.  There is a nice side story about Mexican death customs.  And I also liked the side story of Torrey's awkward cousin Raylene, who provides a not-so-subtle comparison with the dead sister.
Posted by Paul at 6:24 PM