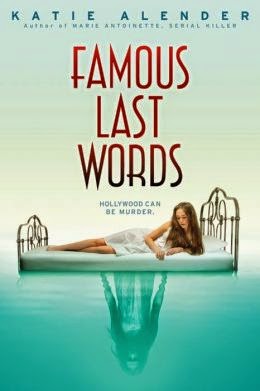 Willa has been seeing things (dead people, flashes, water on the floor, writing on the wall) that no one else sees.  It appears to be tied to her obsession with reaching out to the Afterlife to contact the spirit of her dead father.  But when she and her mother move into her new stepfather's mansion in Hollywood, these hallucinations take on more sinister tones.  And it takes the help of an obsessive-compulsive outcast at school to help her figure out that it all has to do with a serial killer who's stalking young actresses and forcing them to reenact famous death scenes from movies.

Yes, it doesn't make a terrible amount of sense (and it only gets worse in the end), but it's fun enough escapist stuff to read.  Not a lot of character stuff here either (a forgettable girlfriend seems particularly inconsequential), but it's a story with a breakneck pace.  If you like sociopathic killers and poor little rich girls, you'll probably enjoy this.


[Disclosure:  I received an ARC from the publisher in return for my critical consideration.  The book is scheduled for release on September 30th.]
Posted by Paul at 10:01 PM