Side Effects May Vary, by Julie Murphy 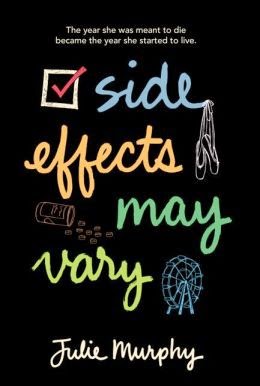 When Alice got sick with leukemia, life went on hold.  Alice's problems with her ex-, the knowledge that her mother was cheating on her Dad, and even her arms-length relationship with her friend Harvey changed.  She was dying and in the period of a year, as her condition grew worse and worse, she found new joy in her family and in Harvey.  She settled scores with old enemies with particularly poetic forms of revenge and came to peace with her fate.  Harvey meanwhile adored Alice and devoted himself to being whatever she wanted, completely losing her own sense of self.

Then a terrible miracle happened.  Her condition reversed and she went into remission.  Suddenly, the idea of living long enough to go to college didn't seem so crazy.  And that is when Alice realized that she's in trouble.   Those kids she settled scores with are still out there.  Her family's issues haven't gone away (they've just been on hold during her illness).  And now that she isn't dying soon, she knows that Harvey is no longer what she wants (despite the fact that he still wants her).  Facing death was easy -- now Alice must face life!

A strikingly original story about life and living in an imperfect world with flawed people.  If you want your characters to be likeable, this isn't a very good book for you.  Most of the kids (and some of the adults) are selfish and mean.  Harvey is weak and spineless.  But Alice takes the cake as a self-centered, cruel, and manipulative young woman.  And while she gets cut some slack for being sick, there's no denying that she's simply not a nice person!  Yet, these are recognizable people with real raw emotions and their struggles ring very true.  So, while this can be unpleasant to read, it is engrossing for its honesty.

My only complaint is the structure of the book -- which shifts between Alice and Harvey's narration and jumps around fairly liberally along the timeline.  Stylistically, I found the combination of regular flashbacks and multiple POVs to be a bit hard to follow (it took about a hundred pages for me to get into the swing of things).  However, it's still a great book!
Posted by Paul at 8:37 PM