The Boy in the Dress, by David Walliams 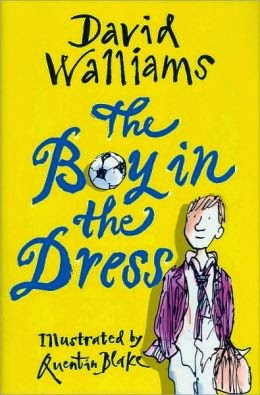 After Dennis's mother moves out, Dennis finds it hard to express the feelings he is having.  Neither his father nor his older brother want to talk about it.  Dennis misses his mother but he finds he also misses her dresses.  Dennis has always had a thing for women's clothing.  At first, he tries to smuggle home copies of Vogue, but when those are discovered and tossed out by his worried Dad, Dennis befriends Lisa (a budding fashionista).  The two of them enjoy long hours discussing clothes and she eventually convinces him to try on some for himself.  That leads to the idea of smuggling him into school as a girl, which ends up disastrously.

A surprising and unusual book for its subject and for its target audience (middle readers).  The book goes a bit silly in the end with just about everyone wearing dresses and giving out fashion advice, but it's all in service to the theme that self-expression is a wonderful thing.  And despite the implied subject of transgender identity, Dennis's sexuality is never really brought up (beyond the fact that he has a strong crush on Lisa).  A breezy and fun read -- and probably a great way to freak out uptight parents!
Posted by Paul at 3:49 PM