The Chance You Won't Return, by Annie Cardi 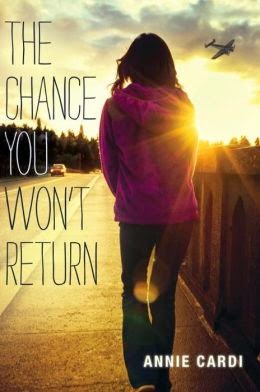 Alex is an absolutely atrocious driver.  It isn't that she's reckless, but quite the opposite:  nervous and terribly afraid that she'll cause an accident.  It's a phobia that is endangering her ability to pass Driver's Ed.  But thanks to help from Jim (an older boy with the patience of a saint and, ironically, a worse driving record), she may master driving.  However, this is really the least of her worries.

Alex's mother is suffering from the delusion that she is Amelia Earhart.  The condition appeared suddenly and grows worse quickly.  The family's insurance won't cover residential treatment, so they have to bring Mom home and care for her as well as they  can at home.  This causes immense stress to Alex, her siblings, and her father, as Mom loses touch more and more with reality.  And Alex begins to realize that Mom has taken to playing out Earhart's life, recreating in her mind each of Earhart's trips, which gets Alex worrying about what will happen when Mom "sets off" on Earhart's last round-the-world trip -- the one from which she never returns!

An ambitious story that tackles vibrantly the crippling impact of mental illness on entire families (and also neatly underscores the financial difficulties of doing so).  The book is at its best when it focuses on Alex's relationship with her parents and the maturing influence of having to rise to these new challenges.  These relationships are nuanced and show both strength and weakness and heartbreaking honesty.

Less successful for me was the driving story and the boyfriend.  I kept waiting for those plot points to get tied in, and one might stretch and find a few places where they converge, but in general they seemed like separate stories.  Cardi's focus is (where it should be) on the family tragedy at play here so those other stories are frequently neglected.  As much as they help to fill out Alex's character, I would have given them an editor's red pencil altogether.
Posted by Paul at 11:38 AM