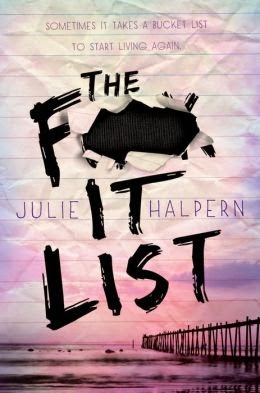 Alex has a lot of trouble in her life.  Her father recently died in a car accident, her best friend has cancer, and there's a guy (Leo) who she isn't sure she wants to get close to (which doesn't stop her from tearing off her clothes, when given the opportunity).  She's a supportive friend to Becca and good older sister to her fatherless brothers, but it pulls her in way too many directions.  What she does have is a great love of horror films and Becca's bucket list, which they have renamed the "Fuck It" list.

The result is a story that meanders along through the year as Becca goes through treatment, Alex and Leo struggle to figure out what they want.  Surprisingly, the List itself doesn't play much of a role in the story.  There's a lot of death and also a lot of sex (the first masturbation scene is on page 57, if you're looking for it!).  Neither the death nor the sex really did much for me, as there isn't much emotion behind it.  Some of that flat emotionless delivery v is the cynical dark attitude that Alex carries with her, but mostly it is the lack of investment that the storyteller conveys.  A functional story, but it doesn't really add much to the genre.
Posted by Paul at 7:36 PM