The Summer of Letting Go, by Gae Polisner 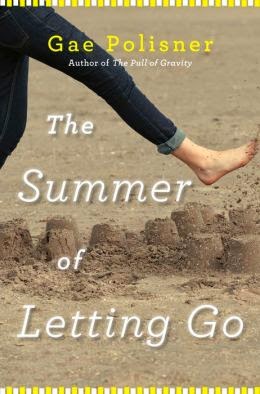 It's a beach story (there's a boy who's off-limits and best friend to betray), but it's also not your typical summer romance.

Four years ago, Frankie's brother drowned in the ocean while she was supposed to be watching him.  In the intervening years, her mother's never quite recovered and seemingly never forgiven Frankie either.  Her father has drifted away from the family, leaving Frankie pretty much on her own, to wallow to self-pity.

Frankie lives in fear of the ocean, of taking care of others, or of opening up to (even to her best friend).  But this summer she decides to be brave and put one foot in front of the other and confront her fears.  In the course of finding out why her father is sneaking around with a next-door neighbor, Frankie stumbles into a job caring for a rambunctious little boy who bears a striking physical and personality resemblance to her dead brother.  As the coincidences and similarities pile up, Frankie becomes more and more convinced that this child is actually a reincarnation of her brother.  Somehow, in the midst of all this drama, there is still some time to squeeze in the love triangle.

Obviously, it's a book trying to do a bit too much.  In general, the romance gets sacrificed to the rest of the story, but by the end, almost every plot line suffers through a quick fix.  This is a shame as the originality of the potential reincarnation plot is interesting and needed a fuller resolution.  Still, I enjoyed a late summer beach novel that finds some novel territory in which to explore.  And, as usual, I want to give a shout out to another YA book that does a decent job of portraying grownups as being real people (and not clueless boobs!) -- parents and other random adults got to be human beings, much to the chagrin of the adolescents in the story.
Posted by Paul at 9:04 PM