Free to Fall, by Lauren Miller 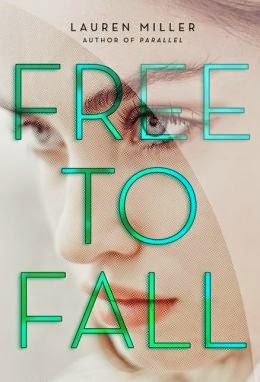 In the near future, everyone will have the Lux app on their handhelds to guide them through life.  They no longer have to worry about making mistakes and wrong decisions, because Lux tells them exactly what the correct choice is.  Of course, they could always choose to do something else, but why would they bother when Lux is always right?  That is, unless they were one of those disturbed individuals who listen to voices in their heads that make them act irrationally -- a socially dangerous condition known as The Doubt.

Rory is a bright kid, so it surprises no one (except her) that she's been accepted at the elite Theden Academy (a sort of Grande Ecole for gifted teens in Western Massachusetts).  Her doubts are not the work of humility; they are founded in a secret that she can't risk revealing:  that she hears The Doubt (an inconvenient fact that would lead to her immediate expulsion if it ever became known).  It's a hereditary condition and her mother (an alumna of Theden) suffered from it as well.

Once at the school though, far more serious issues rear up.  With the help of her roommate and a townie boyfriend, Rory discovers that there is intrigue afoot at the school.  And it has ramifications far outside of its walls.  The release of a new handheld device and its new improved Lux app threatens civilization as a whole and the project, Rory and her friends discover, is tied to the Academy itself.  It is up to them to save humanity from its own willingness to abandon free will for the convenience of technology.

So, it's a dystopian with a strong anti-technology message.  That message can be a bit too heavily delivered and the plot strays into the realm of the silly (particularly when it drags flu immunizations into its crosshairs), but Miller makes some good points and will set some young minds thinking about the benefits and costs of mobile social media.  Not all of it comes off as Luddite ranting.

It's a long book, though, and a busy story.  There are so many subplots that it is a credit to the author that she can tie them all up by the end.  It does though seem like a chore to do so and perhaps a more concise story would have made its point as effectively.