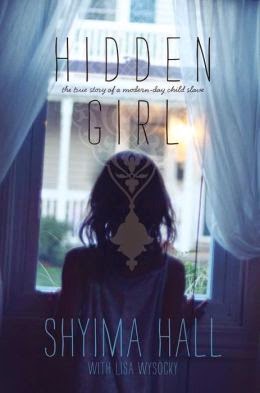 When Shyima was a little girl living in rural Egypt in the 1990s, she was sold by her family into slavery to pay off her older sister's debts.  After a few years of service, her captors moved to the United States and brought her along to continue her back-breaking servitude.  It took almost three years for her to be found and rescued, and many more years after that to recover.  While this true story was widely recounted in the press at the time, in this book she gets to tell that story herself.

The book itself is fascinating, eye-opening, and (of course) horrifying.  That said, it is hard to critique it.  It comes off as petty to point out the inadequacies of the writing as the author has the double whammy of being a non-native speaker and of being denied primary education until well into her teens.  If anything, the halting and sometimes unfocused writing gives the book authenticity and a clear sense of voice.  Some light assistance from co-writer Lisa Wysocky helps, but doesn't interfere with the immediacy of Hall's anger and hurt as she recalls her most painful memories.

What really makes the book shine is Hall's honesty about herself.  She has many strong opinions, but she is as quick to find fault in herself as she does in others. In particular, there's a fascinating section near the end of the book where she talks about her own personality and what enslavement did to how she relates to others and the outside world.   But even before you reach that point, you know that one of the striking legacies of her ordeal is her ability to be bold and frank here.


[Editorial aside:  I don't read much non-fiction and I have never reviewed it here, so this is a bit of a departure for me.  But as this autobiography covers Shyima's adolescent years, it seemed appropriate to include (and the book is being marketed as YA non-fiction by the publisher).  It also doesn't hurt that I've been heavily exposed to Egyptian culture through my father and can vividly recall visiting the type of town from where Shyima came.]