In Honor, by Jessi Kirby 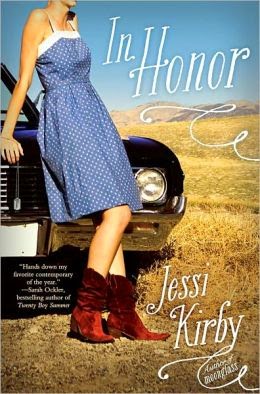 After Honor's older brother Finn is killed in Iraq, Honor is basically an orphan (their parents died when they were young).  In his last letter home, Finn sent Honor tickets to Country-Pop singer Kyla Kelley's final concert and, after the funeral, Honor decides to fulfill his final wish and take a road trip to California to attend the concert.  Awkwardly, she is joined by Finn's estranged best friend Rusty on the trip.

As these stories tend to go, there are plenty of adventures and things do not go quite as planned.  And, as is to be expected, there is lots of recollection and reconciliation as Finn and Rusty come to understand each other (and their relationship with Finn) better.

Not quite as original as Moonglass or Golden, the book follows all the standard conventions, but Kirby's writing still manages to enthrall.  It's a combination of a great sense of character and voice (with the weird exception that her Texans add a "the" to Interstate Highway names the way that only SoCal folks do!) and her eclectic tastes (who ever thought of watching the sun rise from underwater in the middle of New Mexico?).  There's always something interesting going on in this book and that makes the typical navel gazing of the road trip genre slide by a bit faster.  Kirby really is one of the better YA writers currently out there and not nearly appreciated enough!
Posted by Paul at 2:19 PM