The Vigilante Poets of Selwyn Academy, by Kate Hattemer 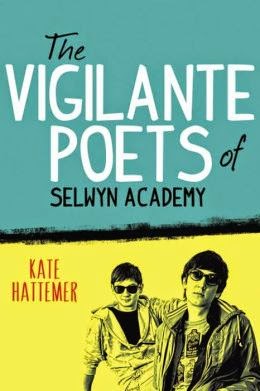 When it is announced that a reality show will be staged at the Selwyn Academy (a high school for the arts in Minnesota), a group of nerds and outcasts decide that they have to do something to fight back against it.  Reality television and this show in particular, is simply an exploitation of the school and a perversion of true "art." Inspired by the poetry of Ezra Pound, which they are studying in English class, four of these students embark on a secret plan to strike back.  Even when their plan is betrayed by one of their members, the other three double down to bring this television show to its knees and to expose the hypocrisy of the show's producers and the school's administrators who are in cahoots with them.

It's an odd story that flirts with absurdity while maintaining humor and originality.  Undeniably, it's very funny, but in the crass and tasteless way that I associate more with male writers like David Levithan.  In the end one doesn't know how seriously to take a story featuring defecation artwork, a heroic tumor-ridden gerbil, and an 864-page "long poem." It works best as an adventure, but Hattemer makes the mistake of occasionally trying to add gravity by exploring hero Ethan's fear of commitment and decisiveness.  The story doesn't have the patience to pursue this, though, and Hattemer was better off sticking to the crude and the rude.
Posted by Paul at 5:18 PM