We Were Liars, by E. Lockhart 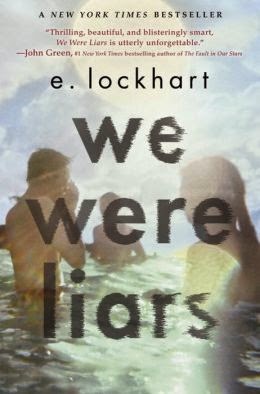 Every summer, Cady and family have come to their private island off the coast from Martha's Vineyard.  Three families in all (grandparents, uncles and aunts, and lots of cousins) -- the entire Sinclair clan in their rich privileged WASPish glory.  The eldest three children (Cady, Mirren, and Johnny) and Johnny's friend Gat (who Cady has been crushing on for many years) have been inseparable.  But something happened in their fifteenth summer and Cady got very sick.  She was found in the water, suffering from terrible migraines and, for some unknown reason, totally alone in her underwear.  And she had no memory of how she ended up this way.  She missed the opportunity to return the next year but, now in her seventeenth summer, she looks forward to being reunited with Gat and her cousins.

However, something is not quite right.  No one will talk to her about what happened two summers ago.  Her grandfather has torn down his old house and put up a new one.  Her younger cousins keep their distance.  As the summer progresses, memories come back to her and the terrible horrible truth is re-emerges.  For Cady, who has been unable to recall it all, the horror is being relived.

A rather darker tale than I usually associate with E. Lockhart, and I don't think I cared for it much!  The story is well-written and the mystery unfolds at a nice pace (although, once revealed, the book really has nowhere to go for the last twenty pages).  I did love the little interludes where Lockhart goes off on the gruesomeness of Brothers Grimm in a lovely set of parallel tales.  But the story was not very pretty or beautiful or even as suspenseful as I hoped it would be.  It was ultimately gross and tragic and a bit cruel.
Posted by Paul at 5:04 PM