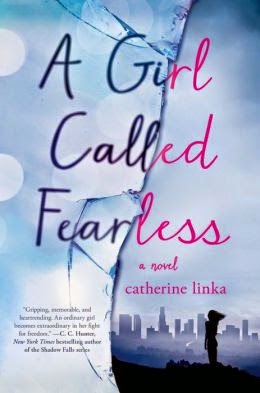 In a parallel universe, genetically-modified beef has triggered a mass cancer epidemic that has killed off most of the adult female population of the United States (wiser countries outside of the US never allowed the GMO beef to be consumed).  In the country that was left behind, the Paternalist political party has risen to power and gotten the government to restrict the surviving women and girls to the home.  Banned from going to college, girls are sold off to the highest bidder as breeding stuck when they reach adolescence.

Despite the political changes, Avie had hoped to attend college when she completed high school, but her cash-strapped father has instead sold her off to an odious, rich and powerful benefactor of the Paternalists.  Determined to avoid her fate as a trophy wife and provider of offspring to a man twice her age, she decides to flee to Canada (where the authorities remain sympathetic and have been known to grant asylum to women fleeing the US).  However, the escape won't be easy.  More so, because Avie has unwittingly stumbled over a conspiracy whose exposure threatens the entire status quo, placing her in the position of having to choose between her dreams of college and freedom, and her sense of duty to her sisters.

The obvious inspiration is Margaret Atwood's Handmaid's Tale, but Linka's story doesn't have quite as lofty literary ambitions.  Pitched more for the adrenaline and hormones of a teen audience, the story features more violence/action and the gratuitous attention to fashion and glamor that one expects in the modern YA dystopian (a sequel is due out next year and, yes, this book is already optioned for a movie!).  An amazingly accommodating boyfriend provides suitable eye candy.

All that said, Linka is a bit grittier than the usual YA writer.  There's significant attention given to real-life survival skills, a realistic lesson on how to fire a 9mm, and a focus on the practical details of this (nonetheless far-fetched) alternative world.  I especially appreciated the fact that this isn't set in some "near future" but most explicitly in a parallel time-line (the mass extinction of women took place in 2002, shortly after the Towers fell).  I found it readable and engaging.  Fluffy but good!
Posted by Paul at 1:39 PM