Ask Me, by Kimberly Pauley 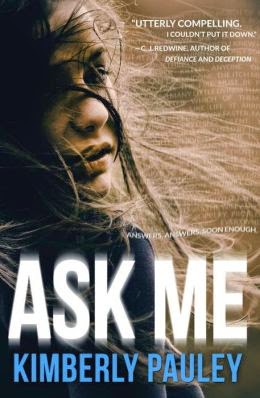 Aria Morse is cursed to be an oracle -- a speaker of the truth. Following her grandmother and a string of ancestors running back three millennia, every time someone speaks a question within earshot (rhetorical or not), Aria must respond (often with answers she didn't even know until they were altered) and always truthfully.  When the behavior first appeared in middle school, it branded Aria a freak at and she learned to keep a low profile and try to avoid being around people asking questions.  And that mostly worked.  But when a string of brutal murders rock her small Florida town, Aria finds her talents bring her into the crosshairs of suspicious police and the murderer.

It's a clever idea and creates lots of interesting twists to the plot.  I like the setting as well.  But the sociopath storyline left me cold. Compared to the fascinating ramifications of a teen who only speaks the truth, a homicidal crazy simply wasn't very interesting. And, while foreshadowing is largely absent, I had figured out whodunnit about fifty pages before Aria did and that just made the rest of the book a chore.  So, a great concept but the execution was a disappointment.
Posted by Paul at 4:35 PM