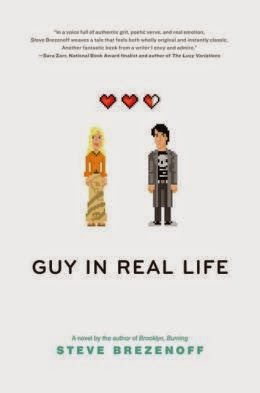 Lesh is a heavy metal fan who's grown tired of the same old grind. His best friend is trying to turn him on to online multi-player gaming, but Lesh can't get into the constant violence and mayhem of hacking and slashing.  It just seems like a boring waste of time.

Svetlana is an introvert and a creative genius.  Leader and dungeon master for the school's gaming club, she spends endless time in her room planning out vividly hand-illustrated and carefully plotted adventures for the club.

When these two young people literally cross paths one night, an unlikely attachment develops. Svetlana isn't used to being noticed (aside from a sleezeball that her parents are trying to hook her up with).  But it is Lesh who truly goes all out:  inspired by her qualities, he creates an online avatar that represents how he sees her and he starts to play this online "Svvetlana," discovering that being a healer rather than a fighter and helping others appeals to him more.  Pretending to be a girl online, however, creates complicated when you are really a G.I.R.L. (guy in real life).

A mixed bag for me.  I love the originality of the story and the idea of an adolescent boy who is growing comfortable with his feminine side.  I just wish that the idea had been developed further. Instead, we spend an awfully long time in the gaming world (inside the characters themselves in a pseudo-fantasy environment), which isn't terribly interesting because it's mostly narrated (apparently gamers in Minneapolis just sit back and get told what their characters are doing, rather than play them).  I wasn't entirely sure what the point was?

And while I liked Lesh and felt he had some great nuances, Svetlana is neglected.  You get some sense of the sexism in role-playing, but not much about why she likes it nonetheless.  As a general observation, guy writers seem to have trouble giving their female characters depth -- which seems ironic in the context of this book's theme!
Posted by Paul at 11:36 AM