Lies My Girlfriend Told Me, by Julie Anne Peters 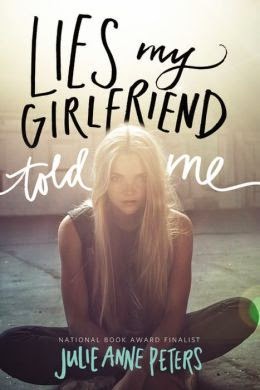 The shock of having her girlfriend die from heart failure is about as big of a surprise as Alex can imagine (who dies of something like that in High School?). That is, until she discovers that her girlfriend was seeing someone else at the same time that they were together.  Meeting Liana (the other woman) is hard for both of them, but as Alex gets to know Liana, the two of them discover that they have a lot more in common than just the same taste in girlfriends.

Peters writes great YA fiction, where the fact that her characters are gay plays second to simply writing a good story.  On the sheer desire of wanting to support the normalization of LGBT YA fiction, I enjoy reading and promoting her books.  Unfortunately, this particular novel is not her strongest.  The plot (which really doesn't have that much to do in the first place) meanders about. Subplots involving the dead girl's younger sister and another one about Alex's former BFF are never well integrated into the focus of the story on Alex and Liana's budding relationship.  However, I still enjoyed this story of girl-meets-girl as an appealing romance.
Posted by Paul at 11:17 AM