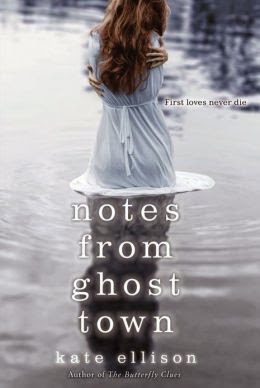 Nearly a year has passed since Olivia's mother confessed to killing Stern -- a piano prodigy who was also Olivia's boyfriend.  As the time of her mother's sentencing approaches, Olivia is angry and scared, and going a bit crazy.  Literally.  Olivia's suddenly gone color blind.  Her doctor can find no physical cause of the disorder and suggests it may be stress-induced.  This is no small matter.  Mom suffers from schizophrenia, which can be hereditary.  And perception disorders can be a symptom of the disease.

Worse still, Olivia has started to experience hallucinations that Stern is appearing before her.  Or are they really hallucinations?  He tells her that her mother is actually innocent, that she was framed, and that he is stuck in limbo until the injustice is corrected.  Olivia, he says, must figure out what really happened and rescue her mother before she is sentenced.  While none of this makes any sense to her, Olivia decides to act.

It's a little of a slow starter, but once the sleuthing begins, Ellison weaves a tight story of intrigue that still finds time for all levels of trust and betrayal, and even a small romance.  The ending wraps things up a bit too easily, but we go through enough to get to that happy ending that it is welcomed nonetheless.  The story's debt to Ghost is a bit obvious, but it's recast enough that younger readers won't mind that this is hardly original.
Posted by Paul at 1:11 PM