Say What You Will, by Cammie McGovern 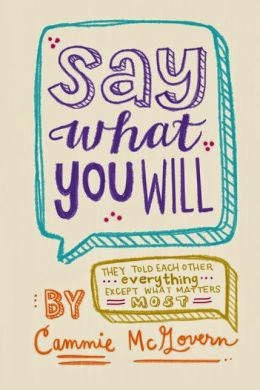 Amy is the girl in a motorized scooter, a hand-held computer that talks for her, and half a body that won't work properly.  Matthew is the kid who taps the lockers when he walks down the hall, washes his hands repeatedly, and never goes out.  Neither of them really have any friends.

When Amy complains to her mother that having a grown-up health aide with her at school basically ensures that she'll never meet anyone, a plan is hatched to hire four "peer helpers" to work with her at school.  Matthew gets hired as one of those helpers.  It's an odd match-up and Amy's over-protective parents aren't thrilled to have Matthew (with his steadily worsening OCD) taking care of their daughter.  However, the two kids discover a special chemistry that transcends their usual public identity as "the girl with CP" and "the OCD boy." The result is a surprisingly touching story of two young people with a special relationship.

The strength of the book is the characters.  They can be stiff (McGovern struggles with Matthew in particular), but they are sympathetic and insightful.  Frustratingly prone to doing dumb things, this makes the reader root for them all the more.  Sales reps with limited imaginations have tried to bill this novel as Fault In Our Stars meets Eleanor & Park, but it really is none of the above.  The kids are not dying and they really aren't geeky nerds either.  They are, however, the only two young people who can see past each other's disabilities due to the sheer fact that they know what it is really like to be labeled.  Their relationship is frighteningly lovely and fragile in a way that grownups will appreciate, and it will break your heart.

The only criticism I have with the story is how long it was dragged out and how randomly the story weaves and dodges.  McGovern has a near-stubborn refusal to follow the usual predictable arc and the story that we begin with is hardly the one with which we end (to paraphrase the wisdom of Chekhov, the pistol in the first chapter is used in chapter three to dig up turnips!).  Yet, the completely unpredictable trajectory of the story is also its strength as it serves to underscore the truth that life goes in unpredictable directions.  Those looking for a definitive conclusion will be disappointed by the one chosen here.  In the end, the story doesn't end so much as slow down enough for the reader to leap off.
Posted by Paul at 3:00 PM