Fat Boy vs the Cheerleaders, by Geoff Herbach 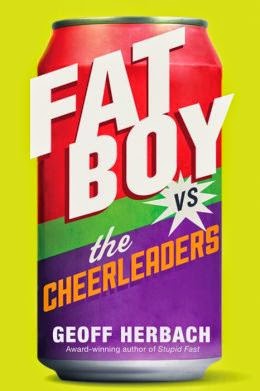 Gabe has a love-hate relationship with the school's pop machine.  It certainly isn't helping his waistline.  On a good day, he can limit himself to only three bottle of Code Red.  But even though he has a bit of addiction to sugary carbonated drinks, the good news is that the proceeds at least benefit the band program.  A small comfort when the popular kids are making fun of your weight.

But then, the price goes up unannounced.  When Gabe goes to complain, he discovers something even more shocking: the proceeds from the machine have been diverted to a new program for the cheerleaders.  Summer band camp has been cancelled and the entire band program is in jeopardy.  In response, Gabe rallies the other band "geekers" to make a stand and defend the music program and their own self-respect.

A strange and fairly random story that delights in the sort of coarse razzing language that YA writers believe belong in "boy" books (and which always does a nice job of driving me towards the books with pink covers instead!).  There's plenty of frenetic activity and little troubling character development to interfere with it.  That would be fine, but most of the action is recounted by Gabe after the fact in the form of a one-sided interrogation.  This device drags things out and artificially builds up the suspense as important plot points are conveniently omitted until later to extend the story.  In sum, a pretty annoying read with a silly plot.
Posted by Paul at 3:37 PM