Searching for Sky, by Jillian Cantor 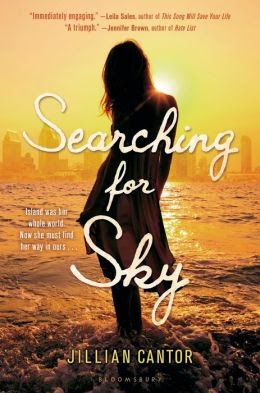 For as long as Sky can remember, Island has been her world. Surrounded by endless Ocean, she and her friend River have survived on captured rabbits, fish, and berries.  Her mother and his father perished some time ago, so now it is only them.  But then, they are rescued and brought back to a world that Sky does not know or understand.  Sent to live with her maternal grandmother (who she doesn't remember) and separated from River, she has to learn entirely new survival skills.

Beautifully written, Cantor delights (perhaps a bit too enthusiastically at times) in contrasting the innocent life on Island with Sky and River's existence in California -- all a little Gods Must Be Crazy (but without the laughs)  Those contrasts and the process these two young people go through in acclimatizing to their new world could make for a stellar book on its own, but Cantor is not content to tell that tale. Instead, she throws in a lot of back story about Sky and River's parents belonging to a cult and a mass murder that implicates River -- all of which ultimately seems unnecessary. Thankfully, this extra stuff is more of a distraction than something to ruin this otherwise nice story of innocence lost.
Posted by Paul at 2:39 PM