The Truth About Alice, by Jennifer Mathieu 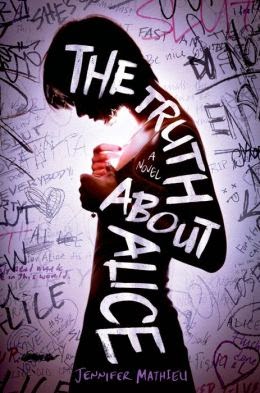 Everyone knows that Alice is a slut.  She slept with two guys within the same hour at a party.  She even was responsible for one of those boy's death a few days later when she sexted him while he was trying to drive his truck.  So what that folks haven't been nice to her?  And so what that people have sometimes exaggerated the things she's done when they re-tell the rumors?  The graffiti in the girls' bathroom?  And the casting out and shunning?  She deserved all of it!

However, the truth is a slippery thing.  As four of Alice's peers recount their stories and admit their small contributions and omissions, a somewhat simpler yet more damning story is revealed.  And it is all the more shocking for its plausibility.

A well-written and ultimately icky story about bullying and the role that adolescent insecurity plays in it.  It's a story that is calculated to make you mad.  While there are acts of courage and decency in the story, the overall message is of how pride, vanity, and arrogance will trump the truth.  Mathieu makes no attempt to whitewash and the result is an ugly (but very honest) story about the near destruction of a human being a mob.  Almost certainly the book is on its way to becoming a book discussion subject!
Posted by Paul at 11:50 AM