A Blind Spot for Boys, by Justina Chen 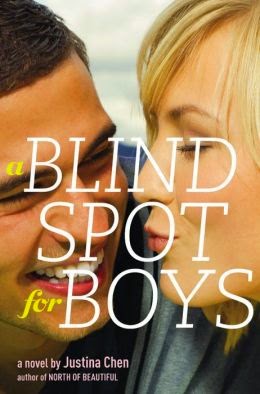 Shana's decided to swear off dating after an unfortunate experience with a much older guy.  So, she is less than thrilled to have her heart set racing from a chance encounter with a handsome guy named Quattro.  Before she has much time to worry about it though, her world is turned upside down when her father is diagnosed with retinal neuropathy and given a prognosis of complete blindness within six months.  With those dark clouds on the horizon, the family decides to launch a series of trips to check off destinations on Dad's bucket list.  She's off to Machu Piccu with her parents!

When she gets there, she finds that Quattro is also there (this is actually foreshadowed in the beginning of the book and not entirely a coincidence).  Her anti-dating resolution is in serious danger (although Quattro for his part also seems to have issues).  The tension that develops could have been the story, but rather than allow that to happen, Chen points things in an entirely different direction.  Their hike to the ancient ruins takes a dangerous turn and the story becomes a survival adventure!

There may be something realistic about a story that doesn't stick to a path.  Perhaps, going from family tragedy to romance to adventure story has some appeal for keeping us on our toes, but it doesn't make for a particularly readable story.  At some point, you just sit back and decide to enjoy the ride.  And unfortunately, the romance and in fact the family's struggle with Dad's impending blindness are largely lost in the noise of the environmental disaster and sheer survival.  Chen is a great writer (I loved her North of Beautiful) and her characters have depth and emotional weight, but this story is wildly out of control!  A book with a title like this should really be about the romance and Chen tries hard, but it's just not a compelling part of the story.
Posted by Paul at 5:22 PM