After the End, by Amy Plum 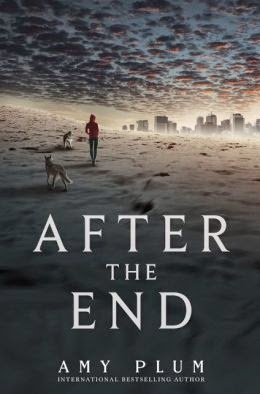 For all of her life until now, Juneau has believed that a great war wiped out civilization thirty years ago.  She and her clan, living in a remote part of Alaska, are nearly the only survivors of an apocalypse.  Aside from occasional unwanted run-ins with brigands and raiders, there is no one else left.  Then, a surprise attack destroys her village and her people are abducted and taken away.  She alone must find them and she sets off in a search, using clairvoyance and other magic she has learned to locate them.

As she sets out, she immediately makes a shocking discovery:  the world was not in fact destroyed.  Civilization is very much still there.  Why would the adults on her tribe lie to her?  There's no one to ask, but it seems tied up to their recent abduction.  Meanwhile, she is definitely being hunted.  In fact, as she quickly learns, there are two separate groups looking for her.  With the help of a spoiled young man named Miles (with a secret agenda of his own), she seeks to find her people in this strange (and very alive) world, while evading the hunters.

An odd adventure, with both realistic and supernatural elements mixed in.  In general, the story worked.  I was less taken by Plum's research - it is fairly obvious that the author has spent little if any time in the settings of the story as her descriptions sound like they were cribbed off of websites and she makes some pretty big geographical errors.  Somewhat more frustrating is the cliffhanger ending which basically lets us know that this the first of an unannounced series.  Don't expect any sort of wrap up as the book stops abruptly without an ending.
Posted by Paul at 1:44 PM