Being Sloane Jacobs, by Lauren Morrill 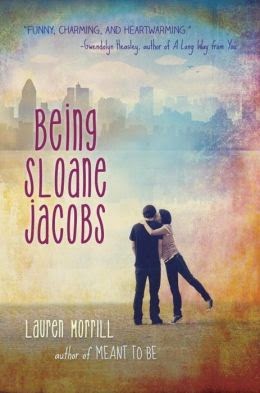 Two girls with identical first and last names decide to swap places while attending summer camp in Montreal.  Sloane Emily Jacobs is the daughter of a US senator, who has just betrayed her.  Her helicopter mother meanwhile is forcing her back into a career in figure skating that Sloane no longer wants to pursue.  Sloane Devon Jacobs is from the other side of the tracks.  Her goal is to score a hockey scholarship to get into college and escape her alcoholic mother and distant father, but she's choking on the rink and afraid that she doesn't have what it takes.  When the two girls cross paths, they bond over their envy of the other's life.

On a dare, they decide to switch roles -- with Sloane Emily ending up at a summer hockey camp and Sloane Devon at an elite figure skating training program.  While they both can skate, they are essentially fish out of water and a great deal of the first part of the book traces their struggle to survive in their new environments.  There's the expected set-backs, but ultimately the overcoming of this adversity to succeed (and to learn something about themselves to take back with them).  Romance, as expected, also pops up and complicates things.

No major surprises here, albeit a unique setting (Montreal).  Morrill tries to add some weight to the story with the family troubles, but neither the alcoholic mother nor the philandering father really get pursued.  Most of the adversity, for that matter, is played through pretty fast.  The pacing is a bit too glib to get hung up on character growth or literary pretension.  Classify this as a summer read.
Posted by Paul at 1:21 PM