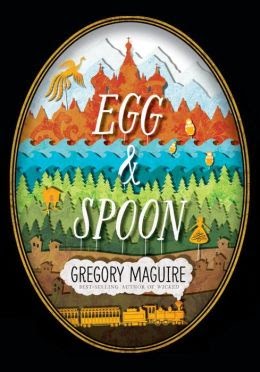 Elena lives a difficult life in an impoverished village in Tsarist Russia.  The men have all been taken away by the Tsar's men and the land has grown unproductive.  Elena has no food and is forced to watch her mother slowly dying.  They are at wits end and there is little to hope for.  Then fate brings a visit from a retinue -- a train laden with more wealth and food than Elena can imagine -- and a young woman Elena's age named Ekaterina.

Ekaterina is on her way to the capital in Saint Petersburg to be presented in Court as a potential consort for the Tsar's godson.  A fateful confluence of accidental events forces the two girls to swap places.  The disorder this unleashes will, in the end, involve the Firebird, the Snow Dragon, Baba Yaga, and the Tsar of All Russia himself.

It's a playful novel that riffs on Russian mythology in the way that his popular series Wicked played on the Grimm's fairy tales.  I liked the story best in the beginning where it is less fantastical and relied on the popular idea of a simple good peasant petitioning the Tsar (i.e., the first 150 pages or so).  But as the story progresses, it grows odder and loses the spirit of the originals.  Certain elements like Baba Yaga's snarky and anachronistic humor is downright grating and mood-killing (think Miracle Max but without Billy Crystal's charm).  The idea of the formidable domovoi transformed into a puppy-dog like creature with duck feet is downright bizarre!  However, the weirdest image is of an army of giant matryoshka dolls attacking in formation.  Still, the book is an amazing accomplishment, pulling all of these elements together, being witty about it, and still formulating a coherent story.
Posted by Paul at 7:39 PM