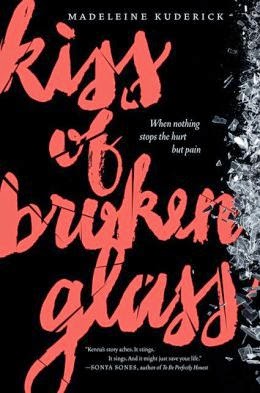 When Kenna gets caught in the girls' bathroom at school trying to cut herself, she runs afoul of Florida's Baker Act and gets involuntarily committed to a "stabilization facility" for 72 hours of treatment and observation.  Those three days of institutionalization give her an opportunity to reflect on her compulsion, how she developed it, and how others around her who also inflict self-harm behave.

Telling the story in verse is a bit dangerous as it tends to invite poignant but ultimately shallow platitudes with implied ellipses.  However, some people (including Kuderick's mentor Sonya Sones) can pull it off.  I give Kuderick a passing grade for being both moderate and inventive.  She avoids some of the easy cheap tricks and at the same time shows some creativity in her verses.  When individual verses stand up on their own (as they sometimes do here), you know you have something.

I'll also admit that Kuderick's admission that this novel was inspired (although not entirely based) on her real daughter's struggle with self-harm gives this effort a pathos and bravery that would paint me a heartless person for criticizing.  However, I thankfully don't have to hide a frank review of what is ultimately an effective work. Books about cutting are pretty easy to find.  This is one of the more interesting ones.
Posted by Paul at 5:07 PM