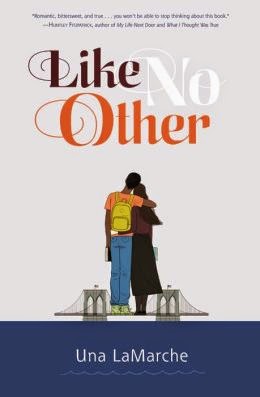 Devorah and Jaxon both live in Crown Heights, but they couldn't be more different.  Devorah is a young Lubavitch Hasid while Jaxon is West Indian.  Their worlds are completely separated.  But one night, during a hurricane, they end up stuck together in an elevator.  This chance encounter changes their lives, opening up a view of each others' worlds that draws them together.  And thus, they fall in love despite the insurmountable barriers to them even seeing each other.


On one side, this can be seen as a modern retelling of Romeo and Juliet.  LaMarche has carved out a splendid look at what happens when two strong-minded young people resist their community's notions of what the future is supposed to bring.  However, there is more going on here.  For Devorah, there is an important question of her ability to choose a future that may not involve marriage at all (and not just with whom she socializes).  And while Jaxon is pleasant enough, the glue of this story is really Devorah, as she explores the danger of rejecting traditional boundaries while still embracing her faith.

The novel, in the end, becomes a cross between the meeting-of-two-worlds of The Geography of You and Me and a far more serious dash of Eishes Chayil's Hush (it certainly seems to offend the same audience!).  Where it differs from both is that it is far more thoughtful and less sensationalist.  Anyone expecting to find a bad guy here will be quite surprised by the ending!
Posted by Paul at 9:37 AM