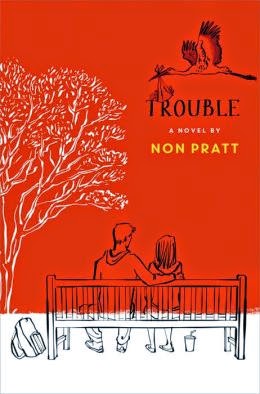 Fifteen year-old Hannah discovers she is pregnant.  She already has a reputation as a party girl, so this just solidifies people's preconceptions.  But in an atmosphere of shaming and hushed secrets, a surprising ally appears in the form of a new kid named Aaron.  The two of them really don't know each other at all, but he volunteers to step forward and pretend to be the baby's father.  Why?  No one really knows and Aaron is keeping his secrets pretty close.  Not that Hannah should talk, since she isn't telling anyone who really is the father!

What emerges is a touching story of two young people thrust into a difficult situation and showing tremendous fortitude in the face of peers and family who sometimes help and other times let them down.  There are some definite meanies (e.g., Hannah's brother and her ex-BFF Katie) and one could fault Pratt for creating Aaron a bit too benevolent, but mostly this is story of people who do both good and evil.  I always appreciate balance and nuance in my characters and Pratt does a great job here.

Pratt is also remarkably restrained in her storytelling.  In the beginning, as the challenges and plot twists get introduced, I felt like we were swinging from one melodrama to the next, but once we got stuff out there, the story walked us through everything at a pace that was believable.
Posted by Paul at 12:05 PM