How to Meet Boys, by Catherine Clark 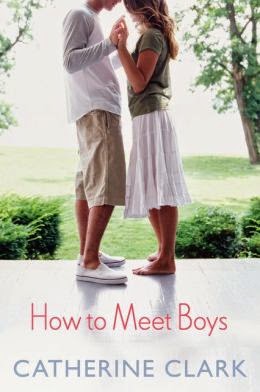 Lucy and her friend Mikayla have an exciting summer planned.  In exchange for working for her grandparents, Lucy has been given her a cottage for the summer, which she and Mikayla are going to share.  The place is a bit run down, but the independence that it promises is intoxicating.

The excitement, however, is dampened by the news that Lucy's grandparents have also hired local boy Jackson to help out.  Jackson and Lucy have a history -- nearly three years ago, he completely broke her heart by spurning her advances and publicly humiliating her.  They have not spoken since and Lucy would like to keep it that way, which will be hard to do if they have to work together all summer.  Meanwhile, Mikayla has fallen hard for a guy, only to find out too late that it's the same infamous Jackson.  How will she ever tell Lucy the identity of her crush?  This and many other adventures await the girls in their memorable summer!

In other words, a light and fluffy beach book, full of awkward moments and girl bonding.  It's entertaining and fun, because the two girls (and their other friends) are sympathetic, but a bit on the lighter end of the spectrum for these types of books.
Posted by Paul at 1:19 PM