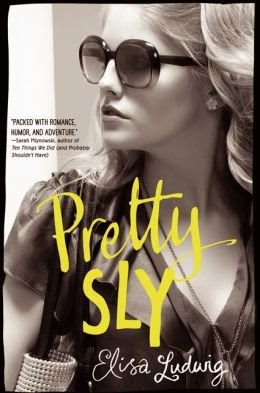 Willa should be trying reform herself and lay low since being released on probation after the larceny streak she engineered (see previous novel, Pretty Crooked). However, when her house is ransacked and her Mom disappears, things change.  Rather than obey her mother's clear indication that Willa should hang tight, she sets off in search of Mom.  This involves reeling in the old gang and even hooking up with her nemesis Aidan Murphy.  But can they find Mom before the cops find them?  Or the FBI?  Or the two thugs on their trail?

The book wants to be an adventure and, while it has its moments and a couple great chase scenes, there's too much weirdness, implausible/impossible twists, and just plain silliness.  The most egregious moment for me was when the two kids jumped out of a third-floor balcony and "somehow" survive (Ludwig never bothers to explain how, she just jumps forward).  The technical feats (car hotwiring, computer hacking, house alarm disarming, etc.) are pipe dreams that would never work in real life as described here, but again Ludwig doesn't let details get in the way.  And then there is the truly horrendous romance with Aidan.  This not only lacks sparks, but has a silly subplot involving Willa discovering Aidan is "sexting" with an unknown girl (although the "Where R U?" texts hardly qualify as sexting), to which I say, who cares?  The whole on-the-run thing is a bit too silly to believe either.  In sum, too much weirdness sucking away the interesting potential.
Posted by Paul at 11:02 AM