Some Boys, by Patty Blount 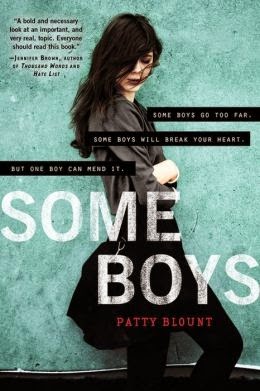 After Grace accuses Zac (the star lacrosse player at school) of raping her, she finds the entire community turn against her.  From the boys and girls (including her former BFFs) at school who taunt her with slurs, to the teachers who tolerate the abuse, to even her own father who holds the belief that she brought this on herself, no one will give her a break.  But when she is sentenced alongside Ian (another lacrosse player) to a week of scrubbing out lockers during spring break, she discovers an unlikely ally.  Told in alternating chapters between Grace and Ian, we get to observe an amazing and organic character development, most notable of which is Ian's conversion from being Zac's friend to recognizing that Grace is telling the truth.

Heart wrenching as the topic of rape is, Blount dwells less on Grace's recovery than she does on the terrible treatment of victims by society, and furthermore never allows Grace to be the victim.  By far, Grace is one of the stronger teen heroines we have seen in YA in a long time (I have no doubt she could deck Katniss!).  While publicity for this novel interprets the story as being about a poor girl needing to be rescued by a man, it really isn't.  Grace falters and doesn't always survive the onslaught of hatred and cruelty which is unleashed on her, but she has amazing fortitude throughout.  And Blount does a pretty good job of pointing out that, while friends are helpful, in the end you really only have yourself to rely on, so that's where you need to find your strength.  A solid winner of a book and very very hard to put down!