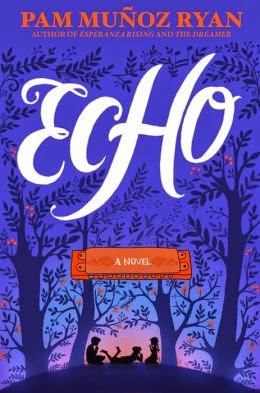 Years ago, three sisters were abandoned in the woods and cursed by a witch.  The harmonica in which they were entombed would carry them far away, but would itself be a magical instrument that would bring both good luck and misfortune to its owners.  First, to a boy lost in those woods and then on to a young man in Hitlerite Germany, passed to an orphan boy in Pennsylvania, sent to a young Mexican girl in California, and finally into the pocket of a soldier deployed back in Germany.  Through happenstance or destiny, the people who carried the harmonica become bound together in the end.

Depending on how you look at it, the ending is either overly convenient or sweetly poetic, but regardless the story is epic and gripping.  Ryan writes beautiful fairy tale-like novels that I have enjoyed in the past.  I did once make the criticism that she had painted herself into a creative corner of always writing novels that seemed like they were trying to recreate Gabriel Garcia Marquez-style "magical realism" novels -- setting every story in Latin America with earthy half fantasy/half realistic storylines.  Here, she proved me wrong.  The beauty and fun of her story telling remains, but she places the bulk of this story in unfamiliar territory.

Recommended audience is a different matter.  The majority of the story is fairly grim and perhaps not so appropriate for younger readers, but it's lively and rewarding for older ones.  The book may be thick (587 pages), but the type is large and the lines are spaced wide apart.  It doesn't take very long to read!
Posted by Paul at 5:02 PM