The Break-Up Artist, by Philip Siegel 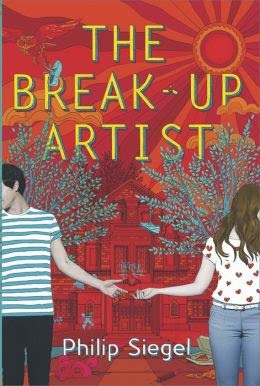 Becca is a cynic about love.  While most of the school swoons over the perfect couple of Steve and Huxley, Becca knows that love is an illusion and nothing ever lasts.  Witness how her older sister got stood up on the altar or the boring love-less union of her parents.  At the same time, there is no denying the destructive impact on friendships caused by these romances or the bitter rivalries that they set off.  Becca has an answer for that:  for $100 she offers clandestinely to break up any couple.  And she's been successful so far.  So, when she is contracted to break up Steve and Huxley, it's just another job, right?

I hated the story and loved the author.  The premise (and Becca's behavior) were a big turn-off.  As becomes apparent pretty quickly, she's got serious underlying motivations for her bitterness, yet doesn't really come clean about them.  The business itself, while intended to be biting satire, is mostly mean spirited (as is weakly brought up in the end).  However, the writing is another matter.  Siegel is, to me, a heroic author: completely busting the stereotype that boys can't write chick-lit.  This isn't just a story where all the major characters are girls, but also a story about girls' relationships first and foremost.  If anything, Siegel could be accused of poorly portraying his male characters (who are creeps at best, and overwhelmingly two dimensional).  I want to read much more from this guy!
Posted by Paul at 8:23 PM