We Can Work It Out, by Elizabeth Eulberg 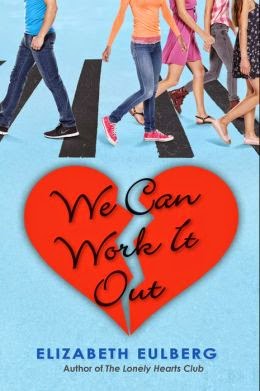 In this sequel to Eulberg's The Lonely Hearts Club, Penny Lane is still heading the club that gave her and her friends a fresh perspective on the importance of friendship over romance, but there's trouble afoot:  mostly, as the girls try to balance their priorities.  It was relatively easy to make a principled stand for girl bonding, but harder when you're also trying to make a relationship work.  And, for Penny, the Club is a far too easy excuse for avoiding her fears about committing herself to another person (even if he is hot!).  Old enemies from the first book (Todd and the principal) make a reappearance and a few new friends pop up, but mostly this is more of the same.

I went back and read my review of the first book (from May 2010!) to see how I received it, and it reminded me of how fresh that first book was.  I enjoyed the strong young women and the liberating message of girls being friends instead of competitors.  Sequels always suffer from the lack of novelty and this one rather more so.  Many of the flaws I noted in the first book (uneven pacing and inconsistent character development) are found her as well.  Constantly plot activity stifles the character development and things get toss in left and right.  Eliminating pointless subplots like Penny Lane's sister's wedding might have provided the space to tighten up a good story.

Eulberg doesn't seem to have much to offer for variety -- as even Penny Lane notes, there are only so many times one can say "sorry!" The pitfalls of Penny Lane and Ryan, in particular seem like an emotional hamster wheel, endlessly cycling over the same landscape of neglect and jealousy until they basically give in to each other -- which feels less like love winning out and more like mutual surrender.

In contrast, there were so many things that could have benefited from further development.  For example, I wish there had been more of two side characters:  Missy (the insecure girl who throws away her self-respect to put herself behind a guy) and Morgan (the only girl with a stable committed relationship in the book).  They each represented important alternative paths and deserved more than the cursory attention they received.

[Disclosure:  I received a solicited reviewer's copy of the book without charge and without any promise beyond providing an unbiased review.  I will donate the book to my local public library.]
Posted by Paul at 1:50 PM