Your Constant Star, by Brenda Hasiuk 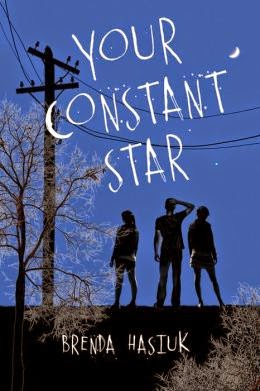 Three young people search for meaning in their lives.  Faye is the adopted Chinese girl who is dutiful to her parents and lives up to expectations.  Bev is the wild child who doesn't care about anyone or anything, but is forced to deal with reality when she gets pregnant.  Mannie is the father of the child, lost in a drug-induced stupor, yet aware (barely) that something great and meaningful is passing him by, and that he should be a part of it.

Rather than telling the story through alternating chapters, Hasiuk devotes entire sections of the book to each of them.  By far, the most interesting character is Faye and she gets the first third of the book.  As the Good Girl, it is fascinating to watch her flirt with danger and rekindle her friendship with Bev at such a pivotal moment.  Bev's section is a bit harder to stomach, simply because she is such a less appealing person.  As she blithely blows off the people around her and professes not to care about anyone, it's really hard to be sympathetic with her plight.  And Mannie, the stoner, is really a bit of a waste to the story.  I get that Hasiuk wants to show that he has depth, but his anger and self-destructive behavior is a huge turn off.  I just didn't care if he messed up his life or not!  And what a whiner!  Give me a story about Faye (and throw Bev in for some danger and drama), but the rest of it drove me nuts!

That said, a book where the characters drive you this nuts can't really be that bad, can it?
Posted by Paul at 11:43 AM