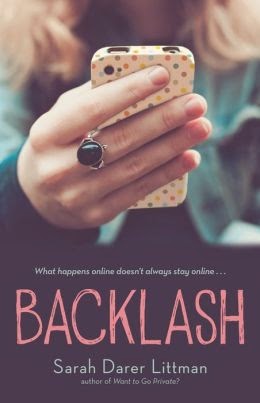 Lara has suffered from self-image problems since she was relentlessly bullied for her weight in middle school.  But now she's shaped up, earned a place on the cheerleading team, picked up a hot boyfriend who's a senior, and gained a lot of confidence.  All of that comes to a screeching halt though when the boyfriend cruelly dumps her on Facebook.  In the face of relentless bullying from her peers and the humiliation she is enduring, Lara tries to take her life.

The attempted suicide fails, but the trauma is just beginning for Lara as she discovers that the boyfriend was fake (she had yet to meet him in person) and in fact the whole thing was a set-up to hurt her.  Just as that realization sets in, another even bigger shocker occurs when she learns the identity of the people who were behind the scam.  The resulting backlash threatens to destroy two formerly-close families and an entire community.

Littman has set out to show how fast and out-of-control little cruelties can go, especially when amplified by social media and the internet.  And in this fast-paced novel, she's done a pretty good job of doing so.  Cyber bullying has featured in a couple other recent novels, but I found this one better than the others I've read so far.  It goes into far more detail about the impact of bullying on the entire family and also explores the roots of it beyond simple petty jealousies.

I cared less for the characters and the ending.  The people in this story are not terribly interesting in themselves (beyond the fledgling romance of Lara's young sister and the boy next door).  Rather, they are mostly a means to the end.  I found the mothers in this book particularly distasteful.  Part of that was for dramatic convenience (making them both self-centered and bitchy provided a convenient excuse for the out-of-control behavior of the families), but there was an overall message that successful working women care more for their careers than for their children.  That message -- intentional or not -- bothered me.  The ending was also a bit rushed.  Lara's recovery is very sudden and not really foreshadowed (as prior to a sudden turnaround she just seemed locked in endless repeat).  Those complaints aside, I still enjoyed the book and recommend it.


[Disclosure:  I requested and received a free copy of the book for the purpose of writing an impartial review.  I'll be donating this copy to my local public library.]
Posted by Paul at 12:50 PM