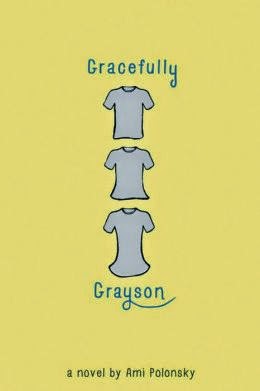 There have been a number of decent YA books on transgendered teens, but the offerings for younger readers have been a bit thin, which makes this recent arrival for middle readers particularly interesting.

Sixth-grader Grayson has a secret daydream where he's wearing a dress.  I simply visualizes the clothes he's wearing and transforms them in his mind into pretty girls' clothes.  He doesn't really know why he likes doing this, he just knows that it's something he longs for.  He also longs to hang out with the girls as one of them and join them in their pastimes.  But he also knows, of course, that this isn't done.

Being uncomfortable with boys (and generally excluded from the girls' social circles), he's kept to himself.  But on a whim, he decides to try out for the school play (an adaptation of the myth of Persephone).  And at the last minute during the auditions, he announces that he wants to try out for the part of Persephone herself.  An understanding drama teacher not only lets him try out, but goes on to cast him in the role.  At long last, Grayson will have the opportunity to wear a beautiful dress onstage in front of everyone!

Grayson discovers just how polarizing gender identification can be.  Friends and family stake out clear positions and Grayson has to deal with the painful realization that not everyone will accept who he is and what he wants to be.  His mother, in particular, blames the (gay) drama teacher for allowing this to happen. Through it all, Grayson continues to explore his identity, experimenting with clothing, socializing with girls, and even the dreaded topic of which restroom to use.

It's a revolutionary portrayal of a transgender pre-adolescent.  The book stands out both for its intended target audience and for its frank discussion of the issues involved.  Some reviewers have pointed out that no character ever comes out and says that Grayson's feelings are okay, but there is a good mix of supportive responses from adults and peers.  Readers may be surprised at the cruelty of some of the adults (the homophobic bullying won't surprise much, but is thankfully kept to a minimum), but it provides a good dramatic edge.

Another thing I liked about the book was its sensitivity to gender dysphoria.  Grayson, it is clearly laid out, is no flamboyant drag queen.  He wants to explore what it is like to be a normal girl.  And he is torn by his joy at the welcoming he receives from some of the girls at school and his ongoing fear that he is being mocked and patronized by them at the same time.  His longing to simply be accepted as a girl is portrayed with an honesty that will touch open-minded readers.

And as for the close minded folks (well-represented by Grayson's principal and his own mother), they can start plotting their book banning plans!
Posted by Paul at 9:31 AM

I thought this was such a well done book when I read it, so glad you liked it, too. Thanks for sharing your review and I love your last line - and sadly, it will prpbably happen.