Lying Out Loud, by Kody Keplinger 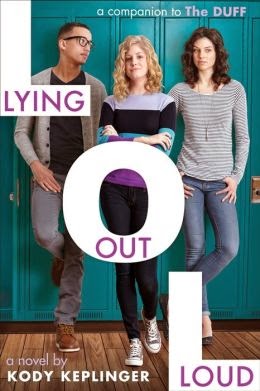 Sonny has a problem telling the truth.  She's hiding out in her best friend's room -- for months -- allegedly because she was kicked out of the house.  She has trouble holding down an after school job because she keeps lying to her boss.  Despite the fact that her loose relationship with the truth is hurting her, she allegedly can't stop herself.

One night she finds herself texting for the entire night with a guy she thought she hated.  She's discovered that she really likes him.  But as they are signing off he calls her by her BFF's name and she realizes that she's been using her best friend's phone for the entire conversation.  She's afraid to correct him in case he should change his mind about her, and her biggest lie commences.

As any child knows, the more you lie, the more you have to keep on lying (although apparently Sonny's never figured this out and she continues to make her life worse and worse with her lies).  This goes on in painful layer or layer until, inevitably, it all blows up in her face.

I honestly hated this character.  It's pretty much de rigeur to have a character make a few mistakes, but Sonny keeps doing it again and again.  I also don't like liars (who does?) and Sonny's actions come across as selfish and mean -- not that there is any real cost to these failings.  At the end, we get the complete turnaround and the predictable forgiveness from all parties.

It's written well enough and, since it's based on the universe of the popular Duff, I'm sure there is an audience for this, but know what you are getting yourself in for.  For myself, I couldn't stir up any enthusiasm for a young woman with such a profound character flaw.


[Disclosure:  I received an unsolicited ARC of this book in return for my impartial review.  My copy will be recycled.  The book is slated for release on April 28th.]
Posted by Paul at 1:38 PM