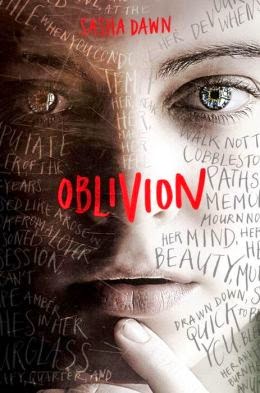 Callie suffers from graphomania (a condition which causes her to experience an irresistible urge to write).  A year ago, around the same time that her father (an abusive fallen priest) and a young woman in the parish went missing, she was found writing "I killed him" endlessly on the walls of an abandoned attic.  While she seemed an unlikely culprit, the authorities did suspect that her condition was brought on by having borne witness to what  happened.  So they have her working with a counselor to try to regain her memories.  That work and the help of a guy at school trigger more episodes that begin linking her writing (while seeming nonsense and gibberish) to solving the mystery.

It's a complicated story and a hard one at first to latch on to.  There's a lot of violence as well as disturbing imagery.  While almost everything gets tied up in the end, it's hard in the first read to see how this will all gel together.  As always, I tend to favor simpler and more direct stories.  Pushed to streamline things, I'd point to the needless conflict between Callie and Lindsay (the daughter of Callie's foster parents) -- it never really came together and didn't have much purpose.  However, this is well-crafted and you may prefer the complexity.
Posted by Paul at 3:26 PM