The Edge of Falling, by Rebecca Serle 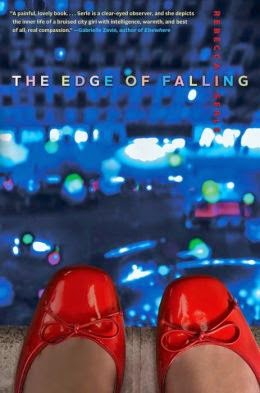 Caggie lives in the lap of New York luxury, in a world where everything is possible and costs don't matter.  But her picture perfect family is shattered when her younger sister dies in a drowning accident.  Caggie blames herself for the accident and it is obvious that her family doesn't entirely disagree.  Her life has become flat and the things that used to matter to her (her boyfriend, her position on the school paper, her friends) no longer do.  Even the attention given to her for saving another girl's life last year (after her sister's accident) feels hollow.

Then she meets Astor, a boy unencumbered by a past and willing to leave hers alone.  He's the only one who doesn't force her to confront her grief, and instead just lets her live in the moment.  However, what is he hiding from?  And is it even more dangerous than what haunts Caggie?

A story ostensibly about grief, but with so little to say about it that it instead relies on other themes to fill its pages.  For the first half, that theme is life in Manhattan as a super rich and famous teenager.  Serle delights in name-dropping places showing us in great detail what it is like to live without a financial worry in the world.  That type of voyeurism never did much for me, but will appeal to the Teen Vogue crowd.  The latter part of the book (and it's quite late!) sees the story shift into a weak psychological thriller.  Astor gets creepy (but not too creepy) and we worry for a bit about Caggie's safety.  There's also some attempt to have her break through her grief, but I didn't really buy it.  Serle does a great job of creating a setting and building the scenery but doesn't do as good work with directing her actors.
Posted by Paul at 1:53 PM