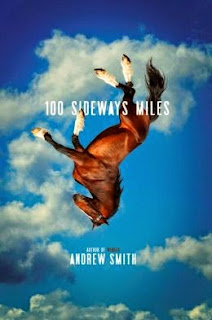 The Earth moves twenty miles every second and fact that endlessly fascinates Finn.  As a result, he's sees time as distance.  So, every second, every minute is measured in miles.  He's also trapped with the same name as a character in his father's famous science fiction classic (which causes people to assume that the boy character is inspired by Finn), has eyes of two different colors, suffers from epilepsy, has a best friend who is endlessly talking about his boners, and experiences unfortunately-timed epileptic blackouts.  As well, there's an amazing girl named Julia in his life, a potentially Nazi-sympathetic history teacher, and a German exchange student who pays boys to let her give them hand jobs.

If you haven't figured out that this is boy book (complete with scatological references, beer guzzling, and endless discussion of sexual arousal) then the proposition is pretty well laid out by the book's cover:  a depiction of a horse's corpse about to land on a much younger Finn and his biological mother (crushing Mom to death and leaving Finn with neurological damage that causes his episodes).  All of this random stuff means it's a funny book but not a particularly tasteful one.  If you enjoy novels like John Green's Abundance of Katherines, this one is right down your alley.  But for fans of books with pink covers and strong stories about interpersonal relationships, this one won't be quite as appealing.
Posted by Paul at 3:21 PM