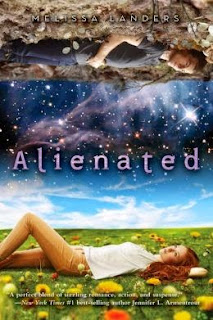 Earth has been contacted by an alien race called the L'eihr.  The aliens propose an exchange between the two worlds:  three outstanding young people from each planet will visit the other world for a year.  Cara has been chosen as one of the three representatives and is looking forward to the opportunity.  But first, her family will serve as hosts to a young man from the other world named Aelyx.

As you can probably predict, initial distrust and cultural misunderstandings will dissolve into friedship and more.  But will the distrust between the two cultures and violent xenophobia being fomented by human extremists destroy any chance of an  alliance?

When I picked this up, I initially thought it would give us a glimpse of an alien high school as we got to experience Cara's year abroad.  Instead, this story tells of Aelyx's stay on Earth (a place we already know pretty well) at a stereotypical American high school.  Thus, what we end up with is just the sexy-foreign-exchange-student story.  The social dynamics among these aliens are also so human-like that the science fiction stuff seemed unnecessary in the end (perhaps it will be more pronounced in the sequel?).  I'd have probably cut it all out and made this a story about a sexy Arab exchange student coming to stay with Cara's family.

The weakest part is the ending.  It's a rushed affair as lots of loose ends are tied together and the settings are placed for the next installment.  Basically, once we're off Earth, Landers is pretty much out of her comfort zone.  The strength was actually the relationship between Cara and Aelyx and the book works pretty well as a romance, even if Aelyx just seemed like a typical YA boy and not a clone from an alien planet.

In sum, a pretty typical YA romance, but only mediocre Sci Fi and action.
Posted by Paul at 3:31 PM