Anything Could Happen, by Will Walton 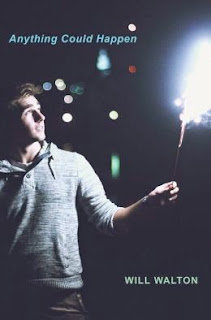 Everyone thinks Matt Gooby is gay, simply because he has two Dads.  But that's stupid, thinks his best friend Tretch, there's no one that Matt is gay!  How does Tretch know this with such certainty?  Well, because Tretch is gay and he has an unrequited crush on Matt.  As much as Tretch likes Matt, he's just as terrified to tell him so.  Instead, he suffers through helping Matt find a girlfriend and even going on a double date with a girl of his own to maintain the illusion of just being friends.

There's a lot more to the story (a dying grandfather, a bully, finding the journals of a dead great uncle, and the whole process of Tretch coming out) but it's in such a non-linear fashion that you spend much of the book trying to figure out how it's all going to come together.  That it actually does come together is testimony to Walton's skill as a writer in this strong debut.

As a LGBT book, this novel cleaves an interesting middle ground.  Some books (and I have in mind David Levithan's in particular) make a big deal of showing just how gay they can be to prove that they are not a "straight" book.  Other authors tend to bury the sexuality altogether in a literary attempt to say "see, we're just like you!"  But this one falls between these positions, telling us not only a coming-out story that is unequivocal about Tretch's sexuality and the complicated nature of his feeling for his best friend (the getting-caught-in-the-laundryroom scene is particularly memorable!) but also a coming-of-age story that is universal to all young people.  Thus showing that, for Walton, sexual identity is important but not all-defining.

[Disclaimer:  I received a copy of the book from the publisher in exchange for my unbiased review.  After I complete this review, I am donating the book to my local public library.  This book is scheduled for release on May 25th.]
Posted by Paul at 10:56 AM