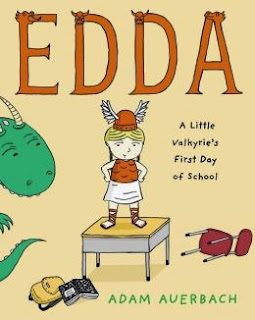 Edda is bored and lonely.  Sure, life in Asgard is pretty cool with dragons and giants, and she has lots of older sisters.  But she would like to have a friend her own age.  Her one-eyed Dad is very wise and suggests that she should attend school on Earth.  Edda isn't sure how she feels about leaving Asgard, but her father assures her that Valkyries (even little Valkyries) are very brave, so she goes forth.

School is very scary. There are lots of new faces and she has to learn to take turns on the slide and to do things she doesn't want to do.  But in the end, she makes friends and even invites her friends to come visit her in Asgard and see the dragons.

I don't really review many picture books, but occasionally something just jumps out at me like this.  Little kids won't get the jokes (in fact, most adults probably won't either!), but I loved the humor and sly references to Norse mythology.  The story itself is very sweet and addresses children's fears and apprehensions about leaving home and attending school for the first time.
Posted by Paul at 1:25 PM