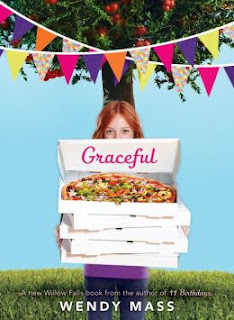 At the end of The Last Present, little Grace had awoken from a coma with powers inherited from the local eccentric (and enigmatic Angelina).  The full scope of those supernatural powers is not known to anyone (most especially Grace) although she does seem to have the ability to create pizza!  But mysteries don't remain such for long, and as a series of cryptic postcards start arriving from Angelina and things start changing, the kids of Willow Falls know something is afoot!

In this fifth installment in Mass's Willow Falls series, all is (more or less) revealed and loose ends are (more or less) tied up.  One could argue that that was the intention of the previous book (The Last Present) as well, but this novel does a more solid job of finishing the series.  It is not, unfortunately, nearly as compelling as its predecessors.  Unlike the quirky 11 Birthdays or the more poignant Finally or 13 Gifts, there really isn't a theme here. With the prior books, there was always some sort of unifying theme and the magic was simply window dressing for something deeper and more meaningful (usually growing up, discovering friendships and love, etc.).  Also, as Mass warns in the forward, if you haven't read the other books, you will have trouble following this one.  But moreover, you might not care.  Unlike the preceding books, there simply isn't much of a story here and the magic exists in and for itself. So, we have a combination of a confusing storyline and not much of a purpose.  This simply extends the story, but with a focus on the magic rather than what made these magical.

While the story (or lack thereof) left me cold, I still enjoy the author.  Mass gets the middle reader audience.  I continue to love the pitch perfect way she depicts the age (with the characters neither ignorant nor worldly) and the utterly comfortable way she depicts friendships without all the hangups of writers who want to make a big deal anytime a boy and a girl are in the same room.


[Disclosure:  I received a solicited review copy of this book from the publisher in exchange for an unbiased review.  Having completed that review, I will be donating the book to my local public library.]
Posted by Paul at 11:08 AM