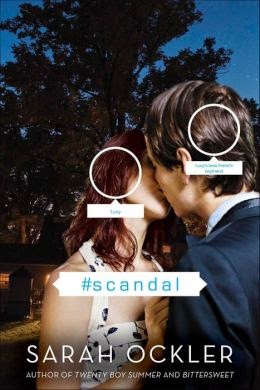 Lucy's best friend Ellie is sick and home with the flu, so she begs Lucy to be her boyfriend Cole's date for the Prom.  They are all good friends, so it will be doing Ellie a favor and she trusts Lucy.  Lucy however has been harboring a crush on Cole for some time and, at an after-Prom party, she makes the fatal mistake to act on her impulse.

The next morning, Lucy learns of a much bigger scandal:  someone has stolen her phone and uploaded all of the pictures she took at the party (including a number of highly compromising ones) on Facebook using Lucy's own account (apparently, she doesn't password-protect her phone or have auto-wipe enabled on it either).  Now, everyone hates Lucy for getting them in trouble and publicizing their secrets (amongst which is a picture of Lucy and Cole kissing). What then unfolds is a crazy ride through the politics and gossip of high school, as Lucy joins forces with zombie fighters, her famous movie star sister, a stoner named 420, a foreign exchange student, and an anti-technology student club called (e)VIL to figure out who set Lucy up and why.

The story itself is absurd (in an artistic sense).  Ockler is making some critical observations about technology and the evils of social media, but mostly she is trying to depict how hyper-kinetic adolescent life is in a high tech world.  It's not intended to be a realistic portrayal, but rather exaggerates aspects that will otherwise feel real to young readers.  For me, I found the whole thing as grating as fingernails on a chalkboard (remember those?).  Unlike a book like Libba Bray's Beauty Queens, which was just full-out satire, this one can't really decide if it's going for crazy fun or making a serious point.  Falling somewhere in between it just seemed silly.

This is particularly illustrated by the characters.  Except for Lucy, none of them felt real.  Many, like 420, Jayla, or the principal were just there for satirical value.  Their contribution is to serve as a foil for the story, but not really to advance it.  And the romance?  Forgetaboutit!  Cole switches between hot and cold as often as my shower while the washing machine is going.  By the end, no one really cares if Lucy and Cole ever manage to get their romance going.
Posted by Paul at 5:28 PM