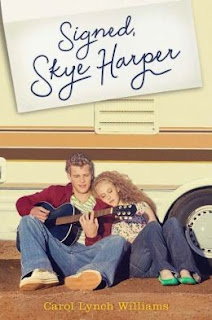 It's the summer of 1972 and fifteen-year-old Winston is fantasizing about one day being a great Olympian swimmer, just like Mark Spitz.  She's also got a thing for the son of her grandmother's business partner (a man with whom grandmother herself had a relationship with - giving birth to Winston's mother).  Speaking of which, at the time the story kicks off, said mother has suddenly written home begging her mother to come and bring her home.  Lacking a reliable vehicle for a cross-country road trip, grandma "borrows" her business partner's RV for the trip.  The owner's son is found on board as a stowaway and we have the makings of a quirky road story about Winston,  her grandmother, her half-uncle (and potential boyfriend - ew!), a dog, and a rooster on their way from Florida to Las Vegas.

Quirky and choppy best describe this story (183 chapters over 292 pages - many of them mostly blank).  It doesn't take a long time to read, but it can be hard to follow.  Winston is supposed to be some sort of trailer trash from the way she talks and the way she misspells certain words, but at the same point we are expected to admire her strong will and her self-determination (mostly to avoid becoming a pregnant teen like her mother and grandmother).  She wasn't badly portrayed, but I never warmed to her.  I did appreciate that the period details are kept low key and non-distracting (sharp-eyed youngsters may notice that Led Zeppelin is not playing on an oldies station but out of an eight-track player or that the Big Mac is served in a Styrofoam container).  However, the novel seemed mostly just functional.
Posted by Paul at 3:40 PM